A bilateral monopoly is illustrated in Figure 3, which is identical to Figure 2, except that the employer is now facing a strong union. 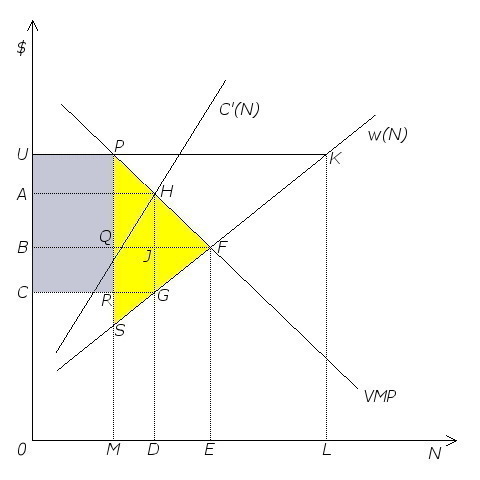 In the absence of a union the employer hires 0D workers and pays them a wage of 0C, just as he did in Figure 2. We have already seen that both the wage rate and the total surplus will increase if the union imposes a wage between 0C and 0A, and that the surplus and employment will be maximized if the wage is set at 0B. Faced with a minimum wage of 0B, the employer would employ 0E workers — DE more than he was employing before the union entered the picture.

The trouble is, the union has no incentive to push for a wage of 0B, or for any other wage between 0A and 0C. Even if the union signs up every worker who was initially working for the monopsonist, it will be representing 0D, not 0E workers. The DE workers who would be added if the wage rose to 0B are not in the union and cannot vote on the contract.

More likely is a union wage like 0U. At this wage, the employer’s effective marginal factor cost curve is the horizontal line UK. Equating this to VMP at point P, the firm chooses to employ only 0M rather than 0D workers, and MD workers lose their jobs. What makes a result like this not only possible, but likely, is that the contract is ratified by a majority vote of the union members. If the union follows a seniority rule regarding job security, we would expect the 0M most senior members to vote for the contract, and the MD most junior members to vote against it. Since there are more of the former than the latter, it is likely that the contract would be ratified.

As was true in the competitive labor market, the union has succeeded in redistributing surplus from the employer to the workers who still have jobs. This is represented by the gray-shaded rectangle CUPR. However, in the process the union has increased the deadweight loss, which is now described by the yellow-shaded triangle SPF. Involuntary unemployment has also increased because at the wage rate 0U, 0L workers would like to work in this craft or industry, but only 0M can find jobs.

The ‘right’ to strike

At this point it is fair to ask why employers should agree to a minimum wage rate like 0A in the competitive labor market illustrated in Figure 1, or 0U in the bilateral monopoly described in Figure 3. After all, in the competitive market there are plenty of workers who would be happy to offer their services at wages much lower than 0A, and in the bilateral monopoly a large number of people are willing to work for less than 0U. The answer is, they have no choice.

Other than government itself, labor unions are practically the only social organizations that have acquired the de facto right to inflict or threaten violence on those who stand in their way. As Ludwig von Mises wrote in his 1949 economic treatise, Human Action:

In all countries the labor unions have actually acquired the privilege of violent action. The governments have abandoned in their favor the essential attribute of government, the exclusive power and right to resort to violent coercion and compulsion. Of course, the laws which make it a criminal offense for any citizen to resort — except in case of self-defense — to violent action have not been formally repealed or amended. However, actually labor union violence is tolerated within broad limits. The labor unions are practically free to prevent by force anybody from defying their orders concerning wage rates and other labor conditions. They are free to inflict with impunity bodily evils upon strikebreakers and upon entrepreneurs and mandataries of entrepreneurs who employ strikebreakers. They are free to destroy property of such employers and even to injure customers patronizing their shops. The authorities, with the approval of public opinion, condone such acts. The police do not stop such offenders, the state attorneys do not arraign them, and no opportunity is offered to the penal courts to pass judgment on their actions. In excessive cases, if the deeds of violence go too far, some lame and timid attempts at repression and prevention are ventured. But as a rule they fail. Their failure is sometimes due to bureaucratic inefficiency or to the insufficiency of the means at the disposal of the authorities, but more often to the unwillingness of the whole governmental apparatus to interfere successfully.

A strike is not just about workers walking off their jobs because their demands are not met. Implicit in a strike is the the threat of bodily harm to anybody who tries to go to work for the entity against which the strike has been called. Anybody who has ever tried to cross a union picket line knows that it’s more than just a demonstration. The picketers walk so closely behind one another that someone trying to get through to the premises being picketed cannot avoid bodily contact with them. He gets jostled and shoved, and if the violence goes beyond that, the police usually look the other way — or arrest the poor guy, who may not even be a strikebreaker.